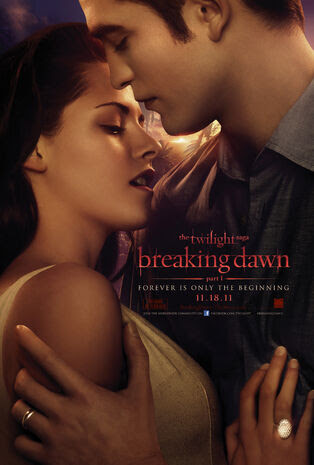 Overview and Review
The twilight saga is a fantasy / drama written by Stephanie Meyers. The story revolves around a teenage girl (Bella Swan) who falls in love with a vampire (Edward Cullen). The story takes place in a place called Forks which is located in the state of Washington. She lives there with her father Charlie who is police officer.
***Spoilers alert***
My review will give a way the plot of the story.
You've been warned... =D

The story starts off with Bella driving her new Mercedes that Edward gave her as a part one of her weeding gift from him (her other car, the beat up old pickup truck died). Bella and Edward tell Charlie about their engagement, Charlie doesn’t show and signs of disagreement but he tells her that she has to tell Renee. Much to Charlie’s disgust Renee has no problem with the wedding (Charlie was banking on Renee to disagree with the weeding so he didn’t have to). Bella and Edward’s Wedding turns out to be as big and extravagant as Alice’s other parties. All of their friends and families were there, even a werewolf (Edward’s new best friend Seth Clearwater). Towards the end Bella gets another surprise, Jacob shows up.  Bella apologizes but he answers that he only wants her to be happy. Jacob then becomes upset and hostel when he realizes that Bella and Edward intent to become intimate while she is still human. Jacob is then escorted off the premises by his pack to keep the peace.

Bella and Edward go on their honeymoon off the coast of Brazil to Isle Esme. Bella becomes pregnant on the island and is progressing at a rapid rate. They decide to head back to Forks so that Carlisle can take a look at her. Bella already has an idea what might have to happen, but she already made up her mind that she doesn’t want to lose the baby.

Jacob receives the news that Bella and Edward have returned home.  Carlisle has advised Charlie that Bella has contracted a rare South American disease, and she must be isolated from the public for the time being. Jacob comes to the conclusion that Bella has bitten and is in the process of being transformed into a vampire, and is mad that the pack leader Sam wont retaliate (The Tribes of  La Push and the Cullen’s have a treaty that states that the Cullen family will not bite a human, and the wolves wont attack the Cullens). Enraged by Sam’s decision not to attack the Cullen’s, Jacob Decides that he will attack himself.

When Jacob gets there he realizes things aren’t as they seem. Bella is not a newborn vampire but a heavily pregnant with Edward’s baby. Everyone knows that the baby is starving Bella and doing damage to her body. But no one can do anything because it is Bella decision plus she has convinced Rosalie (Edwards’s sister) to defend her decision.

While returning to the pack Jacob, inadvertently informs everyone else in on Bella’s state. This causes Sam to give the Alpha Order (the alpha in the pack has the ability to give orders to the other members, even take their will away if the must) to kill Bella and her unborn child. Jacob refuses because he still loves Bella. Sam attempts to take his will away but, Jacob counters this with his own Alpha Command (Jacob is actually the rightful heir to the Alpha in the pack he just didn’t want the job to lead others so he left it to Sam). Instead of being caught up in a battle of alphas to see who will lead the pack Jacob decides to leave and join up with the Cullens. Soon after Jacob departure Seth joins him. Lea also joins them a little while after.

Bella goes into labor and gives birth to a girl who she names Renesmee (both hers and Edward’s mothers names combined, Renee and Esme). After giving birth Bella is very near death, and Jacob and Edward try to save her. Edward injects her with venom and starts to try to transform her into a vampire. Jacob believes it’s already too late and thinks she is already dead and Edward angrily sends him away. Jacob leaves and plans to kill the baby that killed Bella but when he finds it, he finds more then he had bargained for (He finds that he imprints on her - Imprinting is like finding the one person that holds you to this world and you will do anything to protect them).

Bella is transformed into a vampire, and the Cullens are a little wearily around her because being a newborn they aren’t sure how she will react. Bella wants to see her daughter but they refuse to let that happen now because Renesmee is half human and they aren’t sure if her thirst for blood will lead her to do something unthinkable to her. After Bella’s first hunt she is allowed to see her daughter, who is growing at an astonishing rate. Renesmee shows Bella her gift which is similar to Edward’s but, allows her to put her thoughts and images into other people’s mind just by touching them. Bella becomes infuriated when she finds out that Jacob imprints on her daughter who he nicknamed "Nessie". Bella loses her self control and attempts to kill Jacob but Seth Jumps in and, she accidentally breaks his collarbone and shoulder.

There is peace for several months until the Volturi gets word that the Cullen family is keeping an immortal child. Alice see the whole Volturi guard coming to take care of things, most likely meaning that they plan to kill the whole Cullen family. This poses a problem for them because they will be easily exterminated by them. They decide to reach out for help from all of their friends all over the world including the werewolves. They don’t necessarily want the help to fight against the Volturi but to say they are witness that they had seen Nessie grow, though almost everybody is prepared to fight against them if needed.

When the Volturi finally show up they are shock by the numbers that the Cullens managed to pull together. They even have a large number of Shape-shifters on their side (Shape-shifters is the true name of the werewolves. The true werewolves cant phases back and forth at will like the ones of La Push.  It was just by chance that they actually take the form of wolves, they could have just as easily become other types of animals). In the end the confrontation ends non-violently and they all celebrate in the end…

My Thoughts:
This is easily the best book of the series. One of the things I like most is that it gives you a break away from Bella’s annoyingness and switches to Jacob’s point of view which in my opinion is way more interesting. Stephanie Meyers also took it a step further in the character development department by improving the relationships with characters outside of Bella and Edward. If I could change something about the story it would be the ending. They had such a build up to the showdown with the Volturi and then it turns out that they run away with their tail between their legs.