Have you ever considered getting into Anime and(or) Mangas but, not sure where to start.
Check out my list, I might have what you been looking for...
All the Anime & Manga will have links to where you can read or watch them.


If the links dont work leave me a message or contact the site that it is hosted on...
I will also have Ranks under the images to show where i rank the anime / manga out of my all time favorites.

Inuyasha is a Japanese manga series written by Rumiko Takahashi and, was later adapted into an Anime. The story follows a teenager name Kagome Higurashi. She was Born in Tokyo Japan but with the power of the Sacred Jewel (Shikon no Tama) which was embedded into her body, she was able to travel to an alternate feudal Japan. There are many fiends and demons in this feudal Japan that are longing for the power of the sacred jewel. Kagome is attacked by a demon called Mistress Centipede and the Jewel is removed from her body. She is then saved by the Half Demon Inuyasha (he is half dog demon / half human). Kagome accidentally shatters the jewel with a sacred arrow, when trying to retrieve it back from a demon that stole it from her. Inuyasha and Kagome then start their journey to collect the shards of the sacred Jewel, meeting new friends (Shippo, Miroku, and Sango) and enemies (Naraku).

What I don’t like…
- Final Act still hasn’t been dubbed yet in English….
- Sometimes get predictable

Where can I watch i online?
- Anime Freak
- Hulu (Japanese sub only)

Where can I read the manga?
- Manga Reader 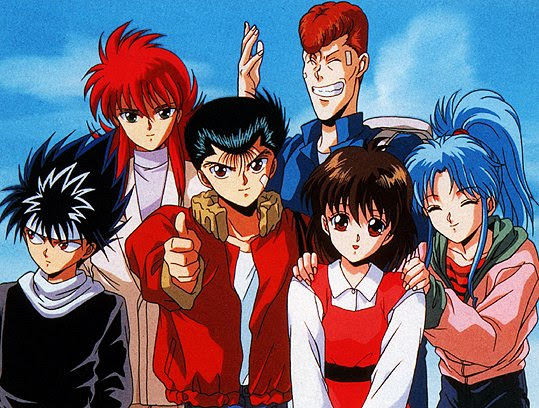 Yu Yu Hakusho is a Japanese manga series written by Yoshihiro Togashi and was later adapted into an anime. The story follows a teenage delinquent Yusuke Urameshi who was killed in a car accident after saving a child’s life. Yusuke is then revived by Koenma and is given the job of Spirit Detective. His new job is to investigate cases involving demons and apparitions in the human world.

What I Like…
- Action
- Story
- Characters
- English dub voice acting

Where can I watch it online?
- Watch Dub
- Anime Shippuuden

Were can I read the Manga?
- Manga Reader

Wolf’s Rain is a Japanese anime series that was created by Keiko Nobumoto and, was produced by Bones Studio. Soon after its release a manga was adapted for it which is kind of unusual at least in my experience, generally the manga comes first and the anime is adapted after. The story follows four lone wolves (Kiba, Hige, Toboe, and Tsume) who have the ability to take the form of humans to disguise themselves. The wolves form a pack to go in search for the flower maiden to open the way to paradise. Along their way they will run into a verity of friend and foes.

What I don’t like….
(Honestly these are a stretch)
- Only 26 Episodes
- Though the ending raps up the story for the most part, it still left me thinking what the hell…

Other Thoughts
This was one of the only anime that really drawn me in. I don’t really want to spoil the story but let’s just say that Keiko Nobumoto knows how to bring emotions out of the viewers. The brilliant work by Yoko Kanno (composer) really set the tone and added to the emotion. I will definitely do a full review on this one…

Where can I watch it online?
- Watch Dub
- Anime Shippuuden