What is it?
Super Mario 3D Land is Nintendo’s new 2D / 3D platform game for the 3DS. Super Mario 3D will combine the elements of both traditional side-scrolling and open world gameplay from previous games. Now to complete a level you have to grab the flagpole before your time limit expires, similar to the original Super Mario Bros. There will also be no health meter in this game, Mario will take damage just like he did in the original NES games (When damaged Mario will shrink, if he is hit while small he will lose a life). Power ups have also returned, including the Super Mushroom, Fire Flower, Super Leaf, (Returning from Super Mario Bros. 3, it allow Mario to transform into Tanooki Mario. He grows a raccoon like tail which allows him to attack enemies, and fly / float) and many more….

Super Mario 3D Land takes advantage of the Nintendo 3DS stereoscopic technology. This means that you will see greater depth when looking at the top screen with the 3D turned on. The game will also utilize other 3DS features such as the gyroscope and, the StreetPass function.

Why should you Care?
This is a completely new Mario game from Nintendo. The game has already begun receiving rave reviews from places such as 1up.com, Famitsu, Game informer, Gamerpro and, IGN.

My Thoughts:
This is going to be a definite buy for me, Nintendo never disappoints with their first party games especially when it comes to Mario, and Zelda… 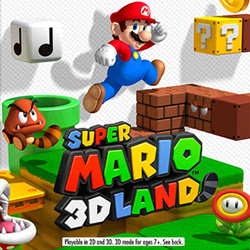