Pokemon Manga creators will be making their first appearance at San Diego Comic Con. They will be taking part in a verity of events including panels and signings.

"Hidenori Kusaka and Satoshi Yamamoto are scheduled to make a series of appearances throughout Comic-Con. The pair will meet fans at the VIZ Media booth for signings and participate on a POKÉMON panel event alongside VIZ Media editors. Other exciting POKÉMON activities will be detailed soon.

“It’s a tremendous honor to welcome Hidenori Kusaka and Satoshi Yamamoto as special guests for the 2016 Comic-Con International,” says Beth Kawasaki, Senior Editorial Director for Perfect Square. “We know fans of all ages will be very excited for the opportunity to join in the fun as POKÉMON celebrates its 20th Anniversary and VIZ Media celebrates its 30th Anniversary this year.”- Viz Media

Thoughts
I so want to go to San Diego Comic Con this year now. I'm already planning on doing NYCC again but its gonna be hard to squeeze this one in my already busy schedule. we'll see what happens. On another note it is great to see heavy hitter from across the pound taking part in US comic conventions. Last year we had Masashi Kishimoto make an appearance at NYCC. We need Tite Kubo and, Akira Toriyama. Or maybe even Rumiko Takahashi. 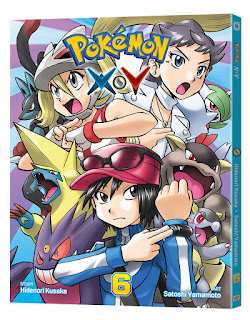