"Adventure across Disney’s magical and wondr
ous worlds in the first mobile app for the beloved KINGDOM HEARTS series!
KINGDOM HEARTS is a tale about Light and Friendship overcoming the power of Darkness. Over the last 15 years, millions of fans have experienced the epic tale of King Mickey, Donald, Goofy, and more than 100 Disney characters joining forces with Sora, Keyblade warriors, and heroes from Square Enix’s popular FINAL FANTASY video game series as they battle to protect their friends and save all worlds from the Heartless.
Become a hero at the very beginning of the KINGDOM HEARTS story in the era of the Lost Masters. Gather LUX—a mysterious form of light—and fight the Heartless as you explore beautiful Disney worlds. Meet familiar faces, strengthen yourself and your Keyblades!" - Square Enix (Google Play Store) 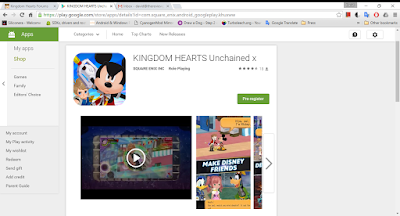 Thoughts
Honestly I didn't realize that this game was coming stateside. Square loves to sneak their products under the radar and this is proof. Not only can you pre-register now for the game but, the game will be releasing tomorrow.