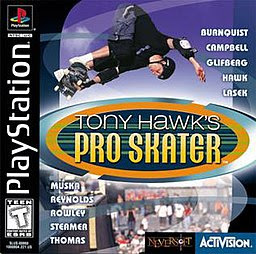 
What is it?
Tony Hawk Pro Skater is a third-person skateboarding game featuring the legendary skateboarder Tony Hawk. The game, at the time was unlike anything we have ever seen before in a video game.

My Thoughts
I am a terrible skater… that right I admit it, there is something I don’t excel at. This game made me feel a little bit better about that because I was able to annihilate all of my skater friends in it. Now that I look back it amazing how many hours I used up playing this game with friends. If I put half of that time into real live skating I would be much better.