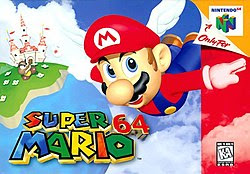 Flat out one of the best games every made....


What is it?
Super Mario 64 for is arguably the most iconic platforming game ever created. It is rare to find a gamer who does not know of this game. Mario 64 was Nintendo first step into the 3D platforming genre and I have to say they made all games in its class look really bad.

Graphics:
At the time Super Mario 64 was top of the line which wasn’t much of a surprise being that the only systems that were competing with it was the Sony PS1 and the Sega Saturn. Both of them were 32bit systems while the N64 was 64bit. Even today the graphics don’t look terrible but they do show their age. It would be awesome if Nintendo would remake this game like they are doing with Legend of Zelda: Wind Waker. I would throw my money at them then.

Audio:
The game also shined musically as well featuring your classic Mario type stuff. You can name a level in game like Bob-omb Battlefield, Hazy Maze Cave, or Jolly Roger Bay and the music just pops into your head.

Gameplay:
The game was practically flawless. Yeah there were a few glitches here and there but overall it just felt right. You can tell the developers were passionate about making this game which I find is lacking in the current generation of gaming. On the controls side of thing the game was built for the N64 controller and it worked will with it. When game was released on the Nintendo DS it felt awkward due to the DS lacking an Analog stick.

Replay:
There is so much to do and explore in this game which gave it a high replay value. Technically you can finish the game with 70 starts (well you can actually you can do it with less with a little help from glitching) but there are 120 starts in the game (150 in the Nintendo DS version).

My Thoughts:
This is hands down my favorite Mario Game. Nintendo really created a masterpiece with this game. I must have played through it 10+ times and own it on all the consoles it was released on (and even some that it wasn’t). I always wished that Nintendo made a true sequel to this game, maybe they will deiced to do it during the Nintendo Wii-U’s live span.