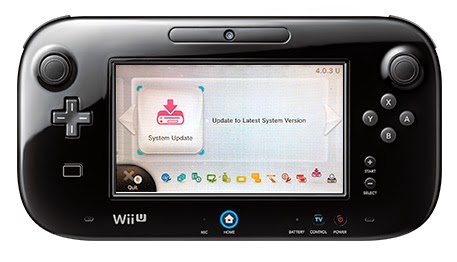 
"A new system update is now available for Nintendo's Wii U home console, introducing changes that enhance the user experience. The most notable change is the addition of a Quick Start Menu for the Wii U GamePad controller. After the update has been downloaded, users starting Wii U with the GamePad controller can view the Quick Start Menu, which displays the icons of the 10 most-used games and applications as the system starts up. Users can then select the game or software they want to launch and it will load simultaneously during the Wii U start-up sequence.

Some additional changes include:
• An improved user setting and selection experience.
• System updates can now be downloaded and installed when the Wii U console is in standby mode.
• Full-screen alerts and notifications can be displayed on the GamePad controller, even if the system is in standby mode. These notifications will tell Wii U owners about new updates, game releases and promotions from Nintendo. Users can adjust how they receive these notifications.
• Easier Nintendo Network ID setup for new users.
• Notifications can now be accessed from the Home Menu as well as the Wii U Menu." - Nintendo