A Million Ways to Die in the West - Movie Review 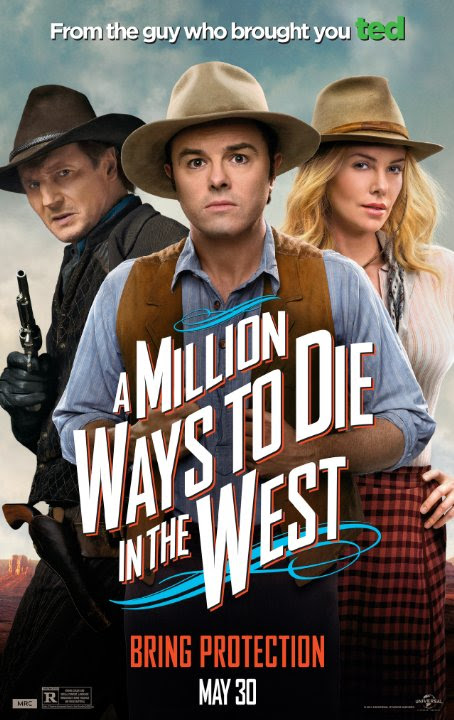 Take the creator of the Family Guy and stick him in the Wild West, and what do you get..? You a funny western...

Movie Description
"As a cowardly farmer begins to fall for the mysterious new woman in town, he must put his new-found courage to the test when her husband, a notorious gun-slinger, announces his arrival." - Rotten Tomatoes

What's Not
- Overly Vulgar
- The Film Drags at times


Albert (Seth MacFarlane) is a sheep farmer (or was it herder... ) has relationship issue with is his gold-digger girl friend Louise (Amanda Seyfried). She eventually runs off the Rich Mustache guy Foy (Neil Patrick Harris). Albert eventually meets up with Anna (Charlize Theron) who is wife to the notorious gunslinger Chinch (Liam Neeson).

The storyline is a bit cliche which isn't necessarily a bad thing. The use of humor will keep the story interesting.

Aesthetics
I don't know what it is but there is something about dirt, sand, old pubs / bars made out of wood, and sunsets that always seemed pleasing to me. The film overall was shot nicely but it probably could have been done even nicer. There is some use of CGI that were some of the more "out there" parts of the film, but honestly it nothing to write home about.

Sound / Audio
Musically there was nothing to negative or positive about the film. The score fits the time period that they were trying to portray.

On the acting side of things it was adequate. Seth Macfarlane was funny like always, and the supporting cast filled in some loose ends.

Replay
Honestly this isn't the type of film i would be watching often being that there is nothing that rally draws you back into the world they tried to create. Would i see it again? Yes probably but, I probably wouldn't pay to see it again in the theatres.

Final Thoughts
Overall A Million Ways to Die in the West was a good film. It is a funny comedy to see if you in the mood for a laugh. If you have watched anything with Seth MacFarlane (Family Guy, American Dad, TED, etc.) you already know what you are getting into. On of my favorite things about this film is how it is very aware of itself (for example Albert would crack jokes alot about the time period).

Recommendation
Being that the film is rated R i would really recommend this film to kids under the age of 17 though these days im pretty sure they have seen worse. This film is for those who enjoy and dont find Seth MacFarlane's other works offensive. If you would like a good laugh, check out this film.