Bum'd out that there is no Siri
on the Android Platform?


Well you probably still will be after this preview,
but this app does show some potential...

Market Description
“Iris. Makes you phone talk topics ranging form Mozart to stock prices. Something that started out as a tongue-in-cheek reply to iPhone’s Siri, iris. Has grown much bigger than being just a Siri Clone.”

My 2cents:
Well technically it wouldn’t be fair to do a review on an app in an alpha stage so here is just what I currently think of it… I ran some basic test that I normally run all the voice activated apps. Here are the results. 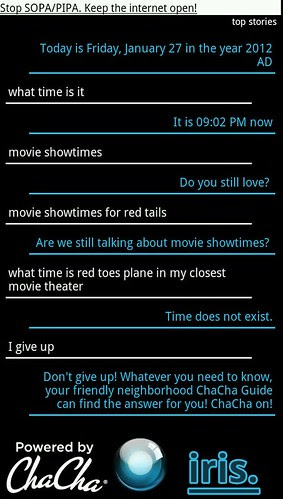 Time & Date: Did exactly what you would expect it to.

Movie Showtimes: I tried but just couldn’t get anywhere…. I did get an interesting response when I said I give up lol….

Local Restraints: I opened up Google maps and showed me local restaurants, so I guess it works.

Definition: I asked it to define Oxymoron: it did just that…

Super Bowl: it gave me the definition of the super bowl…. I then asked when it is. It gave me bundles of info.

“It Will Rain” Bruno Mars: The first attempt failed lol gave me the weather…. When I said play the song it will rain it worked like a charm.

Then I decided to really get to know iris. 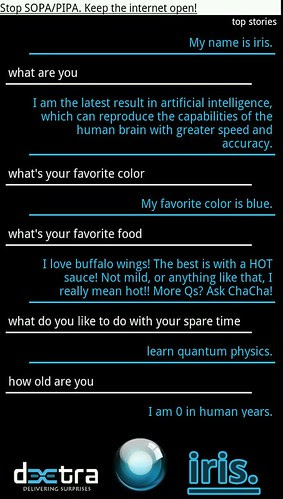 What’s your name? - It said my name is Iris

I then asked what you are. And I got an interesting answer

What is your favorite color? It responded blue which was pretty obvious.

What is your favorite food? I found the answer Buffalo wings to be an interesting…

What do you like to do with your spare time? I found the answer “learn quantum physics” to be quite the turn off.

How old are you? I guess 0 is under age anyways lol

What is your favorite soda? “Ginger Beer” I actually like that too but mine is still Orange…

I then asked Iris a few random questions….

Q: When is android 4.0 coming for the HTC Sensation?
A: I think you already know then answer.
My Thought: Wish I did but my guess would be late February so maybe I’m right….?

Q: Tell me about your self…
A: My guide name at Cha Cha is Patrick M. I like working for Cha Cha. Thanks for asking…

Q: What Languages do you speak?
A: C, Java, Lisp, SETL, and English

Q: Where are you from?
A: I am originally from Dextera HQ. Now I live in Dextera HQ.

And last but not least the questing we were all thinking, not really, but maybe it might be an interesting on to say the least…

Q: do you own an iPhone?
A: Doesn’t everyone have an IPhone? I have a plane for a robot body…. 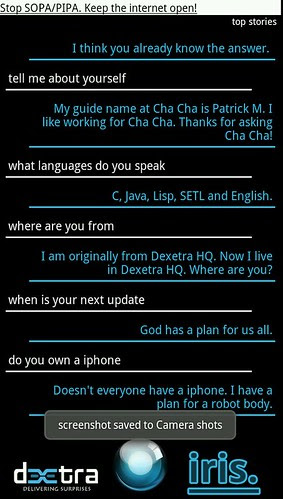 Overall
I think this app has potential, there are a few flaws here and there but it can really only get better considering that it is only in its alpha stages of development. At least it will be able to hold us over till Google decides to overhaul it voice actions or acquire its own voice assistant. As of right now i still prefer Dragon Go! and the Google Voice Search /Actions better.