Street Fighter Alpha the Movie also known as Street "Fighter Zero: The Animation" in Japan, is OVA (Original Video Animation) loosely based on the fighting games. It was directed by Yoshihiko Umakoshi and produced by Manga Entertainment. 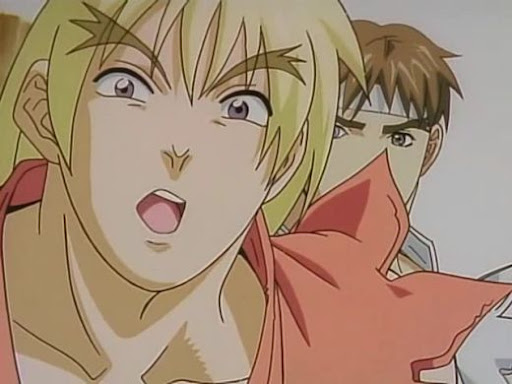 Story follows one of the main Protagonist Ryu as struggles with the Satsui no Hado (Literately “Surge of Murderous Intent”).  Ryu goes to visit Gouken’s (Ryu Mentor / Master) grave and runs in Ken Masters (Ryu’s closest friend). They are then approached by a young boy name Shun who says that he is Ryu’s long lost brother. Ken and Shum decide to enter an underground fighting tournament, but Ryu chooses not to because of his recent struggle with the dark hado. During the tournament Shun is matched against a huge wrestler, Zangief. In the beginning Shun gets the better of Zangief using is speed to his advantage. The tides change quickly though, Ryu then steps in to save Shun.

Where can I watch it online?
Watch me here

Akira is a widely popular Japanese animated film directed and written by Katsuhiro Otomo. The story takes place in a Neo-Tokyo in 2019. It focuses on a biker Tetsuo Shima who has psychic powers, and Shotaro Kaneda (Tetsuo Best friend and leader of the biker gang) who tries to prevent Tetsuo from releasing the dangerous psychic Akira.

What I don’t like
What’s not to like? This film was awesome. The main reason why I didn’t go into detail about the film was because I didn’t want to spoil it. Go watch is ASAP!!!

Where can I watch this online?
Akira

Where can I read the manga?
Apparently there is a manga which I didn’t know about but, I will be reading it eventually too.

What I Like:
- Story
- Plot Twists
- Animation
- Voice Acting
- Action

What I don’t like
Nothing this OVA actual transformed a par anime to me into an excellent one.

Where can I watch it online?
Trust and Betrayal
This one is also awesome!!!