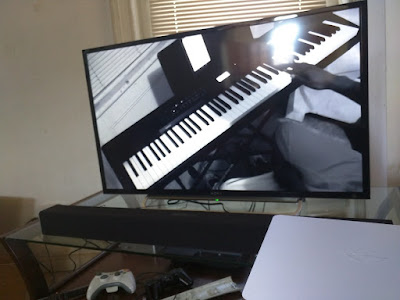 “ Introducing a picture so lifelike, it's like looking through a window. Images appear with natural color transitions and each scene in everything you watch shows crisp, clear detail. HD movies, sports, even YouTube clips and home movies burst off the screen with astonishing detail and color. Sony's X-Reality PRO picture engine draws on its extensive reality database to display more color, clarity and detail in every image.” - Via Sony (Amazon)

What is it?
This is a Sony 1080p TV packed with tons of smart features including LED Edge lit display as well as internet enable streaming apps like Netflix & Hulu. It also allows you to play PS3 games without a PS3 via PlayStation Now.

Build Quality: 3.5
This Sony TV like most Sony TVs is built to look and feel high quality. The only exception here is the Stand / Feet that the TV stands on. It looks great but it wobbles and doesn’t feel as sturdy as it should. Honestly speaking I have never felt like it would topple over but Sony should be better than this. I also noticed that there is a line of dead pixels in the bottom right hand corner of the screen (It’s not noticeable unless you are searching). This is most likely an isolated incident but come on…

Picture Quality |  Audio Quality: 4.25 (Picture gets a 5) (Audio gets a 3.5)
Now to the good stuff. Sony really excels when it comes to picture quality. This TV produces a beautiful picture. There aren’t many TVs in this class that look better in my opinion and I’ve looked at Samsung, Vizio, and Philips TVs. At 60hz you still get a crispy picture without ghosting and artifacts. Gaming on this display is a pleasure. Audio on the other is pretty bad… On the real though I haven’t seen a flat panel display with good built in speakers. They aren’t the worst speakers out there but as an audiophile it is just unacceptable for me. I suggest getting a sound bar. (I highly recommend This One)

Features: 4.5
4 HDMI ports, Component In, Optical Out, 2 USB, Bluetooth, Native Refresh Rate of 60Hz & Effective Refresh rate of 240Hz, LED Edge-Lit 1080p Display, Ethernet port, PS Now ready, to name some… This TV is a powerhouse and shouldn’t be overlooked. This is a true smart TV. Not saying that TV can’t get smarter because they do. If you want to make this one smarter I suggest getting a Chromecast or a Android TV player. I feel that Sony bombed out when they didn’t and the PlayStation VUE app to their TV apps. Not saying they can’t add it at a later but as of now it not available. .

Value: 4.5
All of this for under $400 is totally worth it. Only really real issue is that they is a 2014 model TV and stock is running low. They did make a 2015 similar model but IMO it's not as good as what you get here (being why i purchased this one). You can get the 2015 Model Here.

Around The Web: 4.5
This product is currently holding a 4.5 rating on Amazon.com.

Thoughts
I love this TV and it's currently my favorite purchase of the year. I originally purchased this TV to replace an aging TV that i used exclusively for gaming but this TV picture is so clean that i decided to use it for all viewing purposes. I Highly recommend this product. To make this the ultimate media consumption device Id recommend getting a soundbar or surround sound system. Get a Chromecast or Nvidia Shield TV, and get a PS4 or Xbox One.

To recap my main issues with this TV is that it is sometimes sluggish when Opening and closing menus. Also it seems to like to disconnect from wireless networks every now and then. Then finally the internal speakers like most flat panels are bad. You won’t be disappointed in purchasing this TV. 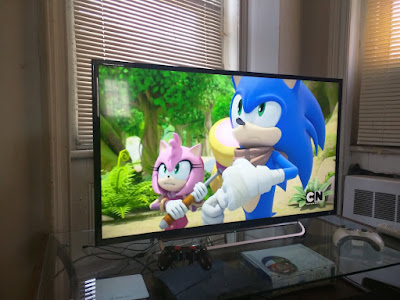