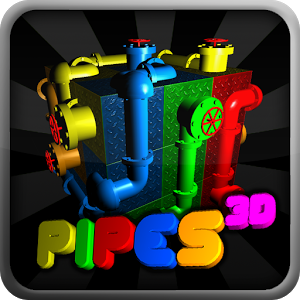 Fan of puzzle type games like Flow? Then you should try out Pipes 3D!!!
#Pipes3D  +Giria Studios  #Android

Google Play Description
“Pipes 3D is a simple, addictive, fun and challenging puzzle game which will make you think in 3D. It is inspired by numberlink aka flow type games, but instead of playing on a two dimensional plane, you get to play on a surface of a three dimensional cube. This game retains the enjoyment and simplicity of a regular flow-like games, as well as offers more challenging ways to play it for those who find regular numberlink type games just a little bit too easy. “– Via Google Play Store

What is it?
Pipes 3D is a puzzle game where you have to draw a line (Pipe) from one point to another. What separates this game from similar games like Flow is that you have to do this on a 3D Cube.

Graphics:
The graphics in Pipes 3D are actually really impressive especially when on the best settings (When I made the video I left the settings on default because I didn’t want to bog down the video.)

Audio:
The sound effects are average I guess… There isn’t really much going on to require a lot of sound effects anyways. Music on the other hand is great. Honestly it doesn’t really do much for setting the tone for the game but it is a really nice piano piece (Might actually cover it lol).

Gameplay:
The game most plays how you would expect. It isn’t really a complicated concept to grasp so you can just dive in and play. Controls on the other hand were in the grey area for me. Sometime my touches would respond just fine and other times I wouldn’t. I would go to connect a pipe and it would rotate the cube instead. That can get frustrating.

Replay:
Pipes can be hard to put down at times. Well, at least until the controls get frustratingly clunky then you will probably have no issue putting it down. Trying to obtain achievements will also keep the game around for a while. There are also plenty of levels to play through as well.

Final Thoughts:
I enjoyed playing Pipes 3D. The sleek visual and high replay values will keep most playing for a while. Once the controls get buttered out a bit it will definitely be a keeper. Good job guys!! !

Recommendation:
If you like Flow Free or similar puzzle games you will like Pipes 3D. If you don’t give it a try anyways, you won’t regret it…