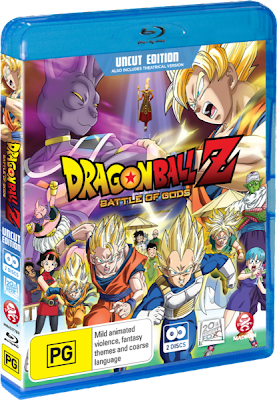 It’s been 17 Years since anything canon has come out of the Dragon Ball Universe. Battle of Gods takes place a short time after the battle w/ Kid Buu.
#DragonBallZ #BattleofGods #DragonBall

Movie Description
The Z-Fighters must contend with Lord Beerus, the God of Destruction, but only a God can fight a God, and none of them are Gods. However with the creation of the Super Saiyan God, will the Z-Fighters be able to defeat Lord Beerus? - Imdb

Story
The God of Destruction (Lord Beerus) goes in search for a Super Saiyan God. He ends up threatening the earth and that where the Z-Fighters step in.

Sound / Audio
It’s amazing how after all these years; the cast can still pull off the voices like it all started yesterday. Musically it is what you would expect from Dragon Ball, which isn't a bad thing. Vegeta's bingo song was a tad awkward though...

Aesthetics / Visuals
Dragon Ball Z has always been aesthetically pleasing. Battle of Gods is no different. The animation has same charm but updated with HD goodness. They also added some slight CG to the mix which also works.

Replay
I have seen the film twice already. Once being the theatrical version and another being the Directors Cut, which are both available on the Blu-Ray. I will be watching it again soon as well. The film is great and worth a re-watch, especially if you are / were a Dragon Ball fan.

Final Thoughts
It’s been a long time since I watched a Dragon Ball film, or any manga based film in general. Normally the all carry the same trend of being completely non-canon (Basically all filler) and, full of over the top battles. Dragon Ball Z: Battle of Gods is not that type of film. It is completely canon taking place a few years after the battle with Kid Buu (Personally if find this more entertaining than the whole GT series.). As stated above the battles are either really brief or you can’t even consider them battles to begin with except for the final one. Battle of God also takes a more light hearted approach (more comparable to how the original Dragon Ball Series was.). In the end I loved the film and glad I purchased it. It was nice to revisit the Z universe after all these years.

Recommendation
If you are / were a Dragon Ball Fan you should watch this...