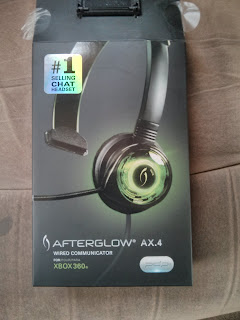 So.. Your Xbox 360 headset died but you don't want to invest in a new one for a slowly fading system (at least this is my sentiments). What do you do? You buy a cheap replacement of course...


AFTERGLOW® Wired Communicator – AX.4
Manufacturer: PDP (Performance designed Products)
Platform: Microsoft Xbox 360
Price: $15.99 – $19.99
Where to buy: Wal-Mart, Amazon (note: that the one I have appears to be slightly different than the ones advertised on both amazon and Walmart) 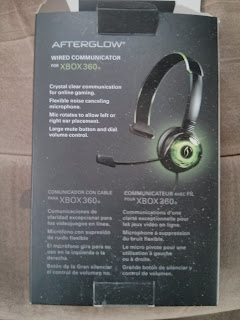 What is it?
The AX.4 is an inexpensive wired headset replacement for the Xbox 360 that glows which ever color you have purchased.

Cons:
-        This glow is pretty dim
-        Experienced instances when I could communicate over the mic (not completely sure it this was due to the mic or the Xbox…)

My Thoughts:
Overall you get what you paid for, and that it’s a pretty good deal. You won’t get turtle beach quality but honestly who really needs that when the main purpose of headsets on Xbox live is to be cursed out by a 12 year old kid while you are playing GTA or Call of Duty…

Recommendation:
If you have an Xbox 360 and you are looking for a cheap headset, pass over the OEM one and pick this one up.