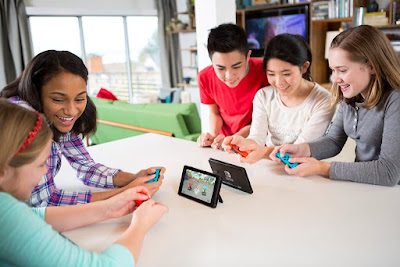 #Nintendo #NintendoSwitch #Gaming #VideoGames #GamingNews
The Numbers are in, and the Nintendo Switch is the top selling console of April 2017.


"According to the NPD Group, which tracks video game sales in the United States, the Nintendo Switch system was the best-selling video game hardware in the month of April with more than 280,000 units sold. This is the second month in a row that Nintendo Switch has led the pack in video game hardware sales, following a record-breaking launch in March. April sales of Nintendo Switch and the Nintendo 3DS family of systems (more than 68,000 units sold) combined to make up almost half of all hardware sales across all dedicated video game systems. The Mario Kart 8 Deluxe game was the top-selling video game in April with more than 460,000 physical units sold. With digital sales added, the total is more than 550,000 units. Making this number more impressive is the fact that Mario Kart 8 Deluxe launched on April 28, which only accounts for two days’ worth of sales in the reporting period, which cut off on April 29." - Nintendo

Thoughts
While there aren't no surprises here it is nice to see Nintendo doing good. I'm just hoping that they can keep the momentum flowing.