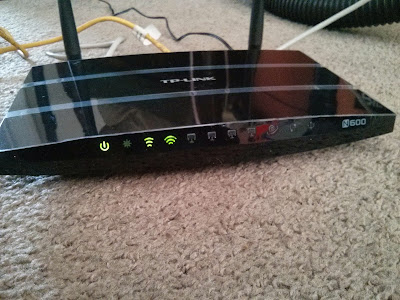 Need a relatively inexpensive router for your home or small office? TP-Link may have the solution for you with its TL-WDR3500 N600.
#Tech #WirelessRouter #Networking

Product Description
“ The N600 Dual Band Wireless Router TL-WDR3500 broadcasts and receives both 2.4GHz and 5GHz signals simultaneously at up to 300Mbps on each band. Like two wireless routers in one, the TL-WDR3500 allows you to run simple tasks such as e-mail and web browsing over the 2.4GHz band, while using bandwidth-intensive or latency-sensitive applications, such as streaming HD video or playing online games, over the less crowded 5GHz band, simultaneously.” - Via Amazon

What is it?
It is a wireless router that supports 2 bands (signals) that run simultaneously. The speed on both signals will max out at 300Mbps. This router also supports wlan printing, media / network servers, and has a USB port.

Build Quality: 4.5
The N600 comes in a glossy piano black finish, that as you would expect is a fingerprint magnet. This also mean that it will most likely be a dust magnet as well. Overall it is very light weight and on the average size for a wireless router. It appears to be about to take a fall but seriously who will be traveling with a router or, place it somewhere where it will fall?

Features: 4
The N600 is packed with features like USB (for printers / drives) , media server, and dual bands that is usually found in routers 2x its price. I kind of wish that they bumped up the max speeds to at least 450 Mbps but in all honestly 300 isn’t that bad for the price.

Value: 5
Lets be honest here the main reason why someone would be eyeing this router next to its competitors is its price. And Yes, it is totally worth it… For what you get for $40 is equivalent to something you would have to pay Netgear $70, or Cisco $85, or LinkSys $65.

Performance: 4
So far it works as advertised. I haven’t had any real hiccups outside of the Android App not really working for me. I’ve also noticed that my Media Server sometimes disconnects when not in use but that is probably just an issue with my server and not the router. Speeds weren't incredibly high but they never really slow to a crawl, and i have multiple devices connected to it via lan and, wireless. I've noticed that this router sometimes struggles while streaming HD video wirelessly from my Media Server.  The wireless range if the wireless router is surprisingly good. I was able to get pretty far away from my house and still be in range of the router.

Average: 4
Based on the Amazon average Reviews…

My Thoughts
Overall it is a great router for the price. You should have no problems streaming and receiving a decent internet Connection from within your house. TP-Link will be putting a lot of pressure on its competitors with their bang-for-your-buck routers.

Recommendation
I recommend this product to anyone who lives in a small house or an apartment who needs wireless internet and on a budget.
Score:
21.5 /25
86 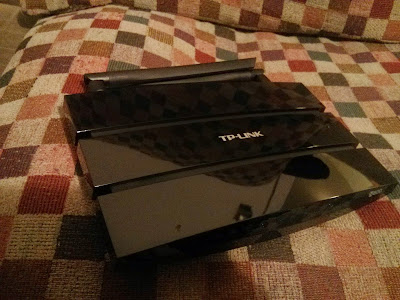