I’ve had this instrument for about 6+ months; this is what I think about it now. 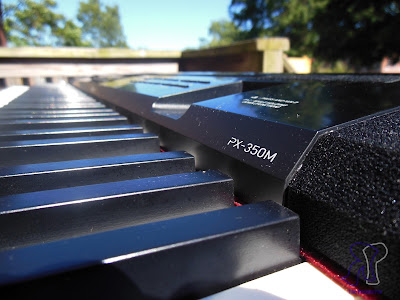 Casio Description
“The PX-350MBK represents a significant step in the continuing evolution of the Privia digital piano line. A combination of a new keyboard action and a powerful new sound engine provide a new level of detail, nuance and expression for a superior grand piano experience in the lightweight and stylish design that Privia is known for.”

What is it?
The Casio Privia PX-350 is Casio’s newest entry into the  portable digital piano line (It is the newer versions of the PX-330.). It is more feature rich than then the PX-150 but less than the brand new PX5. 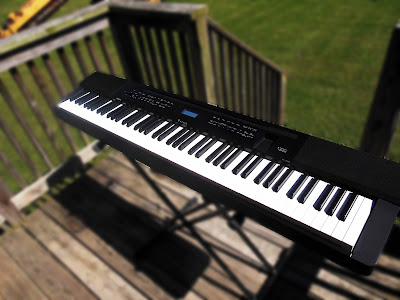 Build Quality:
The Casio PX-350 is built for the traveling performer, it is light weight and easy to travel with. The built in speakers are sufficient for playing in small to medium sized room without the need for amplification. I congratulate Casio for making it look and feel less like a toy, but I guess that goes for all of their Privia line instruments. I love that they put a Standard USB port on the front of the Keyboard that will allow you to plug in an External Hard Drive or a flash drive to record audio to in either WAV or MIDI format. I also found this port to be useful for charging devices like my tablet or phone or power them while I'm lead sheet reading. It is also very useful for plugging in USB lights and fans. On the downside I don’t really like that they placed the headphone jacks on the back of the instrument. The front or even the side would have been more practical if you ask me. I have also noticed that over time the keys seem to make more noise than when I first got it especially my F# 1 key…

Sound Quality:
The Casio PX-350 relies on both the Tri-Sensor Scaled Hammer Keyboard and the AiR which means acoustic & intelligent resonator. These to features combined produce an unprecedented sound and feel that wasn’t seen before in a keyboard that can be purchased less than 1k. All of the piano sounds are great, but some of the other 250 tones are hit or miss. The beauty of having Midi or USB Midi is you get pretty much unlimited amount of tones. As stated earlier the on-board speakers sound great as long as you stay under the max volume (the highest I go is about ¾ the way) then you lose a bit of dynamics and in some cases may experience speaker popping. Audio recorded to an USB Flash drive sounds amazing. It will produce a Wav file, but I noticed that the volume is tad on the low side so I suggest normalizing it using an Audio application such as Audacity. Audio through a PA or amps sound great as well.

Features:
There are so many features on this digital piano that makes it way more valuable than it is priced.
è AiR
è Tone Layering
è 128 Polyphony
è 250 tones
è Ebony and Ivory feeling keys
è 3 touch Sensitivity levels
è Duet Mode (Allow you to split the keyboard in half with matching octaves, Think teacher and student play.)
è Splitting Keyboard (Think choosing a bass in the lower octaves and a Piano in the higher octaves)
è Transposing
è Save up to 10 songs on keyboard
è Midi I/O & USB Midi I/O
è USB
è Metronome w/ taping function (have a tempo in your head? Well you can set that with the taping feature)
è Tons of I/O (Midi, Line, Headphones 2x)
è Display
è Pitch Bend wheel
è And Much More…

My Thoughts:
There are many digital pianos less than 1K but not many are as feature packed as the Casio Privia PX-350. Are there ones with more features? Yes, but in end they are seriously lacking in other areas. You are getting the real deal when you purchase this instrument. The Sound it produces is very dynamic and expressive, that is rare to find in digital pianos less than 1k. The synthetic Ebony and Ivory feel is unheard of in digital pianos under $2500. Normally Casio is playing catch up in the digital piano game but as of late they have been a step ahead of the game and raising the bar enough to make it competitors nervous. I’m Curious to see how Yamaha will answer to this. Their last Digital piano in this class was the Yamaha P155 which is still a beast in its own right but it is starting to look a bit dated.

I recommend buying from Zzounds. I got a great financing offer and received it over night for no shipping cost (could be because it ships from New Jersey and i live in New York)