Favorite Android Apps for Tablets
Device: Nexus 7
Week of: Sunday July 14th 2013 (a little late this week)
This is the tablet edition of my favorite apps for Android 10. OfficeSuite Pro 7 (PDF & HD)
Been away from my PC and Laptop a lot during the last week so i was trying a few different apps out for quick and easy word processing when i was on the move. Office Suite Pro 7 worked out pretty good but i have to say retrieving the documents were more than a hassle than they should have been. (These is more of a issue with MTP devices like the Nexus 7 and the Nexus 4.) 9. Grand Theft Auto III
After the recent release of the GTA V gameplay trailer I felt so in the mood to play GTA, and being that i was on the road a lot I figured that i would give the android version of the original a try. The game ran surprisingly smoothly on the Nexus 7 but the controls don't feel as smooth as they were back in the day on the PS2.... 8. Google+
Google's Social network makes it again on my mot used app list. I was kinda expecting this to be higher on the list being that i use it all the time but then again I do use it more on my Nexus 4... 7. Flow Free
Flow free is basically a colorful game of connect the dots (read my review here). I expected this to be on this list for 2 reasons; 1 being that i played the game a lot because i was planning on reviewing it, and 2 because the game is actually really addictive.

6. YouTube
No surprise here, I spend a lot of time watching YouTube videos on all the devices that i own. I really wish that they would update this app with more features though... 5. Pool Billiards Pro
Pool billiard pro is a great pool game but it lacks some features that are kind of expected this day and age. (check out my review here). Like Flow free I have played this game a lot due to the fact that i was reviewing it. 4. Instagram
Instagram once again makes my android tablet list of apps. Its a little questionable if you as me because i rarely use it on my tablet (someone must be using my Nexus 7 when i'm not...?) 3. Optimum
I just recently realized that they release the Optimum T.V app for android and I am currently working on a review for it. Optimum (or formerly known as Cablevision) is a cable TV provider and this app allows you to watch TV via your android device as long as you are in range of your home network. 2. Pulse News
Pulse new makes it return to the list because it is the only news reader I use on my Nexus 7. I'm Thinking about giving others another chance to see how they have improved over the past few months...

1. Guitar Chords and Tabs
This app once again makes it on the top of my list mostly because I do a lot lead sheet reading on my nexus 7,

Well that it for this week... 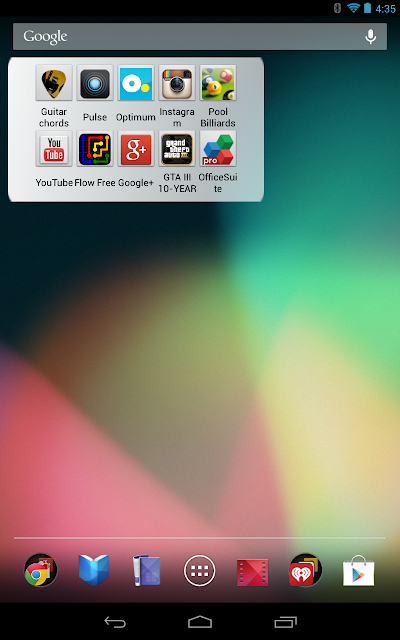