I often get asked what are my favorite apps or what apps do I use most of my phone and why? So I figured I might as well make a section of it. So here it is…

***Note***
These apps are in order to the frequency that I use them. I also left out general phone function like the Dialer and Messaging app due to they will probably always be number 1….

1.  Play Music
This was an easy number one for me. I have been using this app as my main music player app for a while now. I use it even more since they opened up the All Access service. I think I used Pandora once since then…

2. Google Search (Google Now)
Google now is my go to app for pretty much everything…  I use it just as much as I use my phone for phone calls.

3.  Google+
Google plus is probably the most feature rich social media app well platform out there. It is where I go most of the time for to interact with new more, refreshing crowd.  (I know I can’t be the only one tired of like whores and influx of memes.)

4.  Camera
The camera app isn’t the best (I still believe HTC Sense carries the best camera apps out there) but it functional and gets the job done

5.  Opera Mini
Ok this isn’t the best most functional web browser for android but it is definitely arguably one of the fastest browsers out there. It my got to browser when I have a bad internet connection.

6.  Google Chrome
This is an awesome browser for the Google Nexus 4.  I like how it automatically syncs with all of my other browsers (PC and Tablet) but I have to admit as of late performance has taken a hit.

7.  IHeartRadio
Ok so maybe it not really one of my favorite apps but I love listening to Elvis Duran and the Morning Show.
Read the review...

8.  Facebook Messenger
Facebook in general been on a decline but their app has only been improving in particular the messenger app. I love the bubble thing that pops up when you get a message.

9.  Subway Surfer
This is one of the only 2 games I keep on my Nexus 4. I never really get tired of it.
Read review here...

10.  Instagram
I don’t use this app as much as I want to but I really love using it. I really need to start following other people beside my Facebook and twitter friends (They are so closed minded and only seem to post Ignorant pictures and memes… They should really add a Google+ API
Read review here...

11.   SoundCloud
Being a part-time musician SoundCloud is an excellent way to put your music out there.   The app works just like a music player but it also allows you to record and upload as well.

12.  Mobile Metronome
Keeping time isn’t also the easiest thing for me to do but this app work pretty good for times when I can have an overpowering metronome on.

13.  Endomondo Pro
this is still my favorite sport tracker. I admit that I really need to start using it more. Been getting lazy lately.

14.  Capital One 360 (Formally ING Direct)
Capital ONE 360 is currently my bank of choice and their app works wonders for me when I need to deposit checks and make transfers.

15.  Carbon
Though I rarely use twitter anymore my current app of choice is Carbon. It not as feature rich as other but it’s simple and clean. I have to say that I might go back to Tweetcaster though….

16.  Google Keep
Last but not least Google Keep...  I don’t really note take on my phone much but I do on my tablet and it auto syncs with it so it.
Read Review Here.... 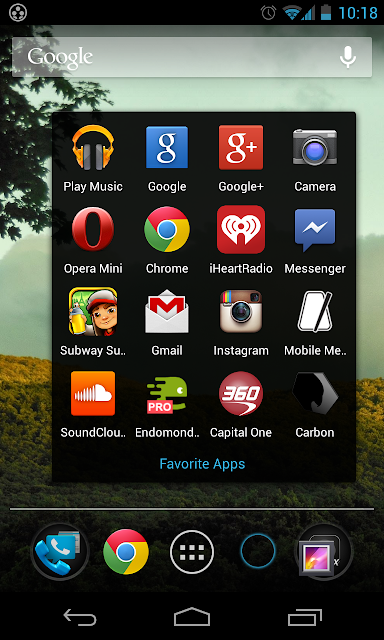 This list turned out to be pretty long so i will make it maybe top 10 or 5 next week...