Famitsu has had an interview with Kingdom Hearts series director Tetsuya Nomura. They were able to get some info out of him.

v  Kingdom Hearts 358/2 Days will be presented in theater mode. Square Enix will be recording new voice work, and they will cover approx. 70% of the plot. They did intend to do a Re: Chain of Memories Style remake to Days but it was too late to begin work on it.

v  Kingdom Hearts 1.5 HD Remix will be using the Kingdom hearts 3D model of Sora rather then up scaling the older model. The gameplay will also receive an overhaul so it will play more like Kingdom Hearts II.

Nomura was also asked if there will be a possible Kingdom Hearts II HD remake, his response was it would be unusual if there wasn’t. (Unofficially confirmed? I think so…)

Update 10/4/2012
The full Famitsu interview has been released and translated thanks to KHInsider forum memeber Goldpanner. 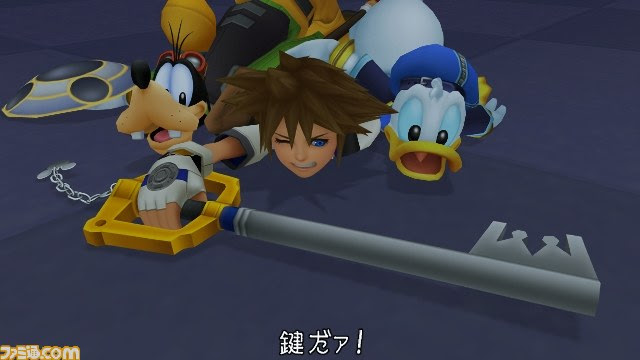 
This year marks 10 years since the first Kingdom Hearts title was born, and now with the time ripe it is being remastered in HD. Let's peruse the content from these screencaps and an interview with director Mr. Tetsuya Nomura!?Please tell us the details of how the release of KH -HD 1.5 ReMIX- came to be.
Mr. Tetsuya Nomura (hereon Nomura): All the titles in the series so far are a collection, first establishing the internal set-up, called the 'Seeker of Darkness Chronicles' (?), and I wanted to bring together the whole story arriving at KH2 before we turn to its conclusion.
?There's strong meaning behind going over it again, isn't there. Will there be changes or additions to the content of the games?
Nomura: The two titles that are included as games will have trophy support. We intend to include an extensive range of trophies, from the more orthodox to ones that won't go down easily. Also, the controls in KH1 have been modified to be a little closer to the ones in KH2. We've also replaced some of the models of the main characters with the most recent ones.
?Why are you remaking KH 358/2 Days as a video volume rather than a game?
Nomura: Actually, I had also been thinking about doing a full remake like KH Re:Chain of Memories (hereon KH Re:CoM). However, if we had started that it would have considerably delayed starting work on the new title, so it ended up being included in the form of something like the 'theatre mode' that we already have in the series. We are changing 70% of the main story into cutscenes, with freshly-recorded voicing too, and we are currently working on around 100 scenes. If you watch from start to finish, you will know and understand the story of KH 358/2 Days. Though it's in a different form than the game I think people will enjoy it.
?Can you please tell us a little more about the series-first KH game for PC browser?
Nomura: This is not a title with an emphasis on story, but we are working premises in. That said, for the first time in the series you can enjoy the content completely separately from the main series, so even beginners to the series might be able to be at ease playing it. The battling is different again from KH Re:CoM, and we are aiming for something with simple controls and flashy movements. I think customising is important to this type of game, so we are filling it with new elements in that area.
?By the way, what of a HD version of KH2 and up?
Nomura: It would be unnatural not to (laughs).
?Here's hoping! And now, lastly, a message for the gamers please.
Nomura: Because the series so far has been scattered over different consoles, I think there have been people who found it difficult to access, with sequels such as KH2 that might already have come out by the time they came to know about the series. With KH -HD 1.5 ReMIX- you can enjoy the story from the beginning, and in HD quality on top of that, so if you haven't played yet please by all means use this opportunity to do so. I think even those who have already played through the series may make new discoveries regarding foreshadowing of sequels and lines that reference previous lines and such by taking another look at everything aligned in chronological order. I would be happy if this title turns out to be a 'restart' for the series.