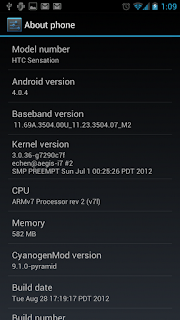 CyanogenMod Description
“CyanogenMod is an aftermarket firmware for a number of cell phones based on the open-source Android operating system. It offers features not found in the official Android based firmwares of vendors of these cell phones.” 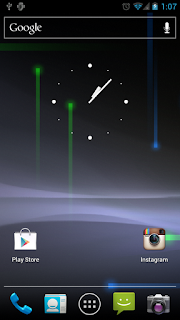 
-          You Still have to install Google apps separately (I remember initially that it they were taken out for copyright reasons or it was against Google terms or something…)
-          AOSP camera apps... It always has and probably always will
-          No 1080p Video recording
-          Wi-Fi tethering issues (tried two of them from the market including barnacle which kind of works.)

My Thoughts:
Ok honestly speaking this is one of the top 5 ROMs available for the HTC Sensation. It flat out just works how you would expect and want your phone to work. Sadly that cannot be said for about 80% of android ROMs. Of the AOSP ROMs available this is clearly number 1. CM9 has been by daily driver since the beginning of September and haven’t really been that interested in changing to any other ROMs. My biggest gripes with this ROM are Wi-Fi Tether is buggy and AOSP Camera is terrible. It is also missing 1080p Video recording. Hopefully CyanogenMod will eventually make or get someone to make a camera app similar to how they include the Apollo music app. If you are looking for a Fast, Stable, 96% working ROM, I highly recommend CM9. 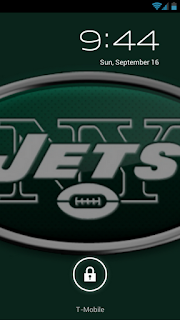