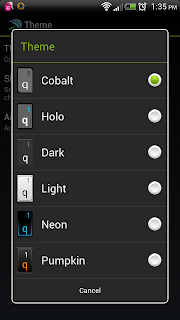 Google Play Description
“Meet the world’s smartest touch screen keyboard for Android.
SwiftKey 3 understands how words work together, giving much more accurate corrections and predictions than other keyboards. Very sloppy typing will magically make sense, even if you miss spaces, and SwiftKey 3 also predicts your next words.”

What is it?
SwiftKey 3 is basically a Soft keyboard that predicts what you are going to type next by taking data from your typing habits and apps like Gmail, Twitter, Facebook, Text messaging, and RSS feeds.

Does it work?
In a word… Yes 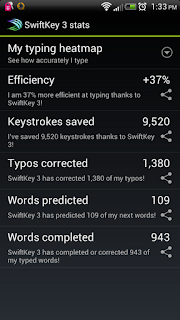 Pros:
- Pretty Accurate at prediction what you are going to say
- Having Arrow Keys is Optional
- Themes
- Learns as you use it more and more
- Give you Statistics data

Cons:
- Kind of Creepy, and the Unknown
- Price (there is a free version though)
- Voice to text is lacking 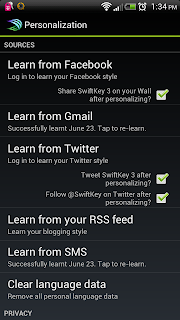 My Thoughts:
This is one of the better soft keyboard apps out there. At first I found the auto correction a litte intrusive but after using it more and more it fixed its self in that manner. Though it does have themes they are a little on the meh side. Price wise it isn’t that much but I find that Soft Keyboards shouldn’t really be more than .99 cents unless that have a super defining feature. This one does as it is really good at predicting text but beside that, it’s just another keyboard. I feel this should be priced at $1.99. I also just realized that there is a free version in the play store as well which are both a pro and a con in my opinion. Con because a lot of people already brought it for 4 dollars.