It's a good time to be a Pokemon Fan, especially if you own an Nintendo Switch as well as a Nintendo 3DS. 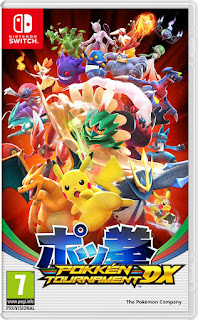 Thoughts
♫ Catch em, catch em, gotta catch em all, GOTTA CATCH EM ALL, POKEMON!!! ♫
But seriously I'm a little surprised that Nintendo is pushing out another fighting game out there due to them putting a lot of emphasis on ARMS. I'm surprised, but I'm also happy for a few reasons. I being that I never really played Pokken Tournament that much but would love to take it on the go with me. 2 I'm still not convinced that Arms is a good game. 3 you can do 2 player mode with Just 1 Nintendo Switch console. I kinda expected a new Nintendo 3DS Pokemon Game but I don't know how I feel it staying in the Aloha Region, but we'll see how that works out. Pokemon Gold and Silver coming to the Virtual Console is Icing on the cake. I'm keeping my fingers crossed that Nintendo Announces Virtual Console for the Nintendo Switch at E3.