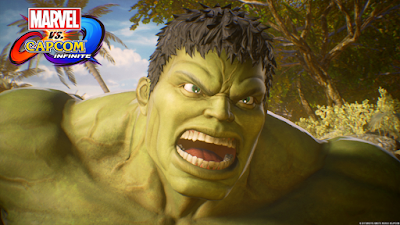 #CAPCOM #MARVEL #MARVELVSCAPCOM #Gaming #FGC
CAPCOM is bringing their hit Marvel vs CAPCOM series to the next current generation.

" Capcom, a leading worldwide developer and publisher of video games, today announced a Hulk-sized helping of new information for MARVEL VS. CAPCOM®: INFINITE, the highly-anticipated return of the revered action-fighting game series. Imagined and created through a shared vision between the two companies, the game will feature free-form 2v2 team battles integrated into a wide variety of exciting and accessible single player modes and rich multiplayer content for new players and longtime fans alike. MARVEL VS. CAPCOM: INFINITE will simultaneously release on the PlayStation®4 computer entertainment system, Xbox One®, and Windows PC across North America on September 19, 2017.
For the first time in franchise history, the Marvel and Capcom universes collide in a visually stunning and immersive cinematic Story Mode, as heroes and villains battle together to save their merged worlds from a sinister new threat, Ultron Sigma. A combination of the robotic foes known as Ultron from the Marvel Universe and Sigma from the Capcom Universe, this psychotic villain is obsessed with infecting all organic life with a cybernetic virus. History’s greatest gathering of warriors must now unite to fight back against Ultron Sigma and save their newly formed world." - via CAPCOM PR

Thoughts
I feel like CAPCOM has given up on fixing the problems with Street Fighter V and decided on moving on which is a shame. On the up side I am a fan of the MARVEL vs CAPCOM series and cant wait to see more on this title.