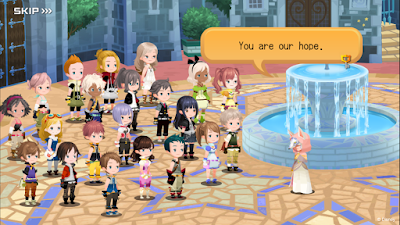 #KingdomHeartsX #KingdomHeartsUnionX #SquareEnix #Android #iOS
The Popular Kingdom Hearts Mobile Game is back with a new name and features.


" The relaunch of the chart-topping mobile RPG KINGDOM HEARTS Unchained χ, is now available on iOS and Android devices. In celebration of the game’s successful first year, SQUARE ENIX® introduces a major update that adds multiplayer mode and additional gameplay enhancements to deliver a complete KINGDOM HEARTS experience for gamers on the go.
The update brings mobile players together in the Union Cross multiplayer mode, where teams of six can embark on quests and new missions and take down hordes of Heartless enemies and massive bosses. Players can communicate using emotes and text bubbles and coordinate multiplayer sessions. The new Theater Mode option also allows players to view cutscenes from the game. " - Square Enix

Thoughts
Its been a while since I have played Unchained X but I'm definitely willing to jump back in seen that they added new features.