“While Sega was seeking a flagship series to compete with Nintendo's Mario series along with a character to replace Alex Kidd as the company's mascot, several character designs were submitted by its AM8 research and development department. Many results came forth from their experiments with character design, including an armadillo (who later developed into Mighty the Armadillo), a dog, a Theodore Roosevelt look-alike in pajamas (who would later be the basis of Dr. Robotnik/Eggman's design), and a rabbit (who would use its extendible ears to collect objects, an aspect later incorporated in Ristar). Eventually, Naoto Ōshima's spiky teal hedgehog, initially codenamed "Mr. Needlemouse", was chosen as the new mascot. Sonic's blue pigmentation was chosen to match Sega's cobalt blue logo, and his shoes were a concept evolved from a design inspired by Michael Jackson's boots with the addition of the color red, which was inspired by both Santa Claus and the contrast of those colors on Jackson's 1987 album Bad; his personality was based on Bill Clinton's "Get it done" attitude. Sonic was created without the ability to swim because of a mistaken assumption by Yuji Naka that all hedgehogs could not do so. A group of fifteen people started working on the first Sonic the Hedgehog game, and renamed themselves Sonic Team. The game's soundtrack was composed by Masato Nakamura of the band Dreams Come True. Sega sponsored the group's "Wonder 3" tour, painting Sonic on the tour bus, distributing pamphlets advertising the game, and having footage of the game broadcast above stage prior to its release.”-  Via Wikipedia.com 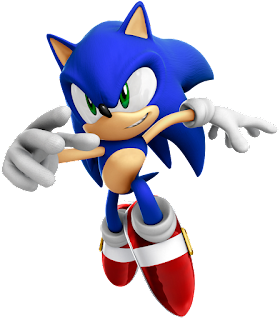 Personality:
Though Sonic didn’t always have a voice, it was always SEGA’s intension for Sonic to have attitude. I’m guessing the intent was to be contrary to whatever Nintendo was trying to achieve with Mario. This concept was easy to see in the design of Sonic, and the animations that SEGA programmed in games (I you ever played any of the games if you just sit still Sonic will get inpatient and start tapping his foot. In some games if you wait any long he will actually lay down showing that he is even more impatient.). Sonic’s personality became more prominent when his animated series started coming out in 1993. It amuses me how Sonic the Hedgehog one of the coolest characters was voice by the nerdish personality on TV Jaleel White (Yeah that right the blue blur was voiced by Steve Urkel during the 90’s). He is currently being voiced by Roger Craig Smith most know for voicing Ezio Auditore da Firenze from the Assassins Creed Series. Overall Sonic is known for being very impatient and having a sassy attitude most of the time, hating oppression (probably why he is on the freedom fighters in the Sonic Cartoon from the 90’s)... Food wise at least during the 90’s cartoon series he is very fond of Chili Dogs but in the Sonic X series I don’t ever remember any reference to it… Guess he got over his addiction and honestly is shows lol. 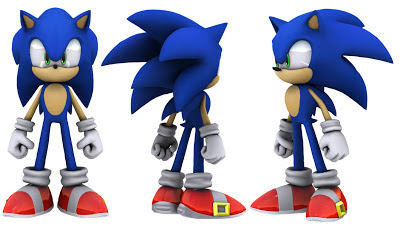 Abilities:
Speed – If you know one thing about Sonic, it is probably that he runs around at super speeds.
Spin Dash – It is an attack / speed boost that made its true first appearance in “Sonic The Hedgehog 2” (Technically he can perform this in the Game Sonic The Hedgehog 1 but it was more of a momentum thing there where you had to run at top speed than press down to roll…)  . It is performed by Sonic curling up into a ball and rotating at high speeds (think of a tire on a car if you just floored it).
Homing Attack – The homing attack made its first appearance in Sonic Adventure though Sonic appears to do it in the cartoon series from the early 90’s… Basically Sonic Jumps in the air like a ball and homes in like a heat seeking missile and attack enemies.
Light Dash – An ability that showcases Sonic’s amazing speed by quickly collecting rings that are aligned close together. This ability made its first appearance in Sonic Adventure.
Ancient Light – An ability that is similar to the Light Dash except it is used to attack enemies. It also made its first appearance in Sonic Adventure.
Ability to Channel the power from Chaos Emeralds (including Super Emeralds, Master Emerald and, Fake Emeralds)  – Sonic has always been fond of collecting Chaos Emeralds but it wasn’t till the game “Sonic The Hedgehog 2” that he actually used them for something by transforming into Super Sonic. He also has the ability to transform into Hyper Sonic by using the Super emeralds. Sonic also has the ability to use Chaos Control which allows him to travel through time and space. In the later episodes of the anime Sonic X Sonic transformed into Dark Super Sonic (though it is unclear whether it was the dark energy from the chaos emeralds or the anger and anguish from Sonic’s emotions)…

Years were looked up using Wikipedia.com

My Thoughts
Sonic The Hedgehog was my favorite character growing up. It was the first game I was able to call my own (There were other games and systems in the house but they belonged to my older siblings. I received my Sega Genesis for Christmas and Sonic The Hedgehog was the game I got.). I was also a huge fan of the cartoon that came on Saturday mornings during the ABC's Kids block back in the early / mid 90's, so me and Sonic go way back. I cant say that i am happy with all of the stuff SEGA is just throwing him in these days (except for generations, that took me on a trip down memory lane specially with the classic remixed tunes from the golden days....) but i have to say I still have a soft spot for him.