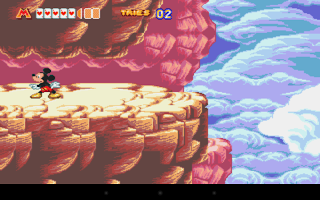 What is it?
World of Illusion is a Platforming game developed by Sega 20+ years ago featuring Mickey Mouse and Donald Duck. The game starts out with Mickey and Donald prepping for a magical act. They eventually get sent to a magical world by an evil magician. The story follow them as they try to get back home. You can either choose to be Donald or Mickey or Both if you play co-op with a friend.

My Thoughts:
This was one of the first games I have owned (others being Sonic the Hedgehog 1&2) to this day it still one of my Favorite Genesis games. It was also the first game I have every beat.  Even playing it now I reminisce on the countless hours me and my sisters put into playing this game. Overall it’s a great side scrolling platforming game.