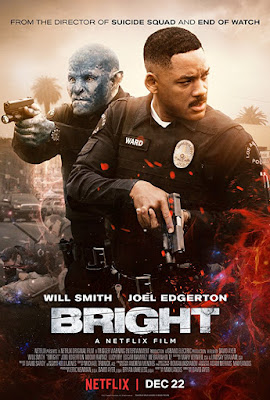 #Bright #NetflixOriginal #Netflix #Film #Movie
Ever wanted to see what a Sci-Fi Bad Boys movie would be like? That’s kinda what the Bright is like minus most of the comedic flair.

Movie Description
“ Set in a world where mystical creatures live side by side with humans. A human cop is forced to work with an Orc to find a weapon everyone is prepared to kill for.” - IMDb

What is it?
Bright is what you get when you try to make a Bad Boy esque Sci-Fi film but choose not to add Martin Lawrence… In other words cut out 50% of the comedic elements and, add Orcs and Elves.

Story: 3
Warning Spoilers Ahead!!! Okay so the story of Bright is pretty straight forward; Brights are special people who are capable of wielding wands without exploding (This is my guestimate being it was never fully explained). An evil Elf and current owner of the wand temporarily loses it and it is recovered by a young elf who Will Smith and his partner find pretty early in the film. Oh yeah about that, so Will Smith is playing a Cop who is partnered with an Orc who is hated by both his fellow officers and the Orc community. Over time they grow to trust each other. Flash forward to half way through the film everybody is after the Wand as well as the crazy elf chick who was the owner of it. Cut to the end, Will Smith and the Orc battle it out with the crazy elf, and Will Smith comes to realize he is a Bright himself and kills her with her own Wand… Yeah… So the more i recall the film the more i see issues with it. 3 / 5 is a generous score when comes to the Story.

Aesthetics: 2
Originally I didn't have an issue with the way the costumes and makeup looked in the film, but after looking at it now I feel like little thought was put into it. All the Orcs look they are wearing modified Freddy Masks. All the money they have spent on the film could have been used to Implement CGI a bit better.

Music / Acting: 4
Admittedly I’m a sucker for 90’s and boom-pap hip-hop and, that's about  95% of the soundtrack played through the movie. On the acting side it is basically what you would expect. Nothing terrible, nothing great.

Replay: 2
Honestly speaking I don’t intend of watching bright again in the near future. There isn’t anything in the film that makes me want to go back and watch it again. They kinda left the plot open to release a sequel but the future may not be so Bright…

Final Thought
I wanted to like this movie, but there just wasn’t much to cling to. The 2 protagonist are the only two likeable characters in the film and at that Joel Edgerton character Nick Jakoby never resolved. He was hated by both his fellow Orkish people and looked as a traitor for being a police officer. He was Hated by the Police force for being Orkish. The only people who seem to change their position on him was the Orkish Mafia after they watched him rise from dead from the power of the Wand…

Recommendation
If you like fantasy films (like i do) give the movie a watch, but don’t go in with high expectations. If you hate Fantasy films, or buddy cop movies this is not for you.