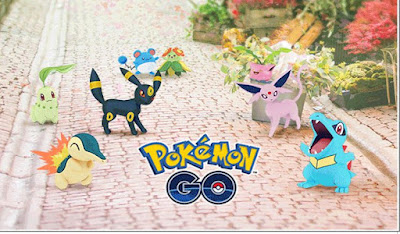 #PokemonGo #Pokemon #Nianticlabs
So Pokemon Go Updates again on both #Android and #iOS, but is it enough to bring players back?

" Trainers, Chikorita, Cyndaquil, Totodile, and many more Pokémon are nearly here! Starting later this week, you’ll have the opportunity to catch more than 80 Pokémon originally discovered in the Johto region in the Pokémon Gold and Pokémon Silver video games. We’ve also implemented some new features to enhance your Pokémon GO experience.
Additional Pokémon: More than 80 Pokémon that were originally discovered in the Johto region in the Pokémon Gold and Pokémon Silver video games, as well as Pokémon with gender-specific variations, will start rolling out in Pokémon GO.
New Evolutions: There are now more opportunities to evolve your Pokémon in Pokémon GO than ever before. Some Pokémon originally discovered in the Kanto region will soon be able to evolve—into Pokémon that inhabit the Johto region! Be on the lookout for new Evolution items at PokéStops, which you’ll need to evolve some Pokémon.
New Encounter Gameplay: When you encounter Pokémon in the wild, don’t be surprised if they react in new ways as you’re trying to catch them. You’ll also notice the addition of new item carousels that allow you to select Berries and Poké Balls directly from the encounter screen. Hone your skills and catch those elusive Pokémon!
New Berries: Pokémon enjoy eating Berries, and you’ll have the opportunity to get two new Berries by spinning the Photo Disc at PokéStops—Nanab Berries and Pinap Berries! Giving a Pokémon a Nanab Berry will slow its movements, making it easier to catch. The Pinap Berry doubles the amount of Candy you’ll receive if your next catch attempt succeeds.
New Avatars and an Expanded Wardrobe: Now you’ll be able to give your avatar a complete upgrade! Customize your look with a whole new selection of hats, shirts, pants, and other items.
Be sure to use the hashtag #PokemonGO on Twitter to share your experiences as you explore your local neighborhoods with family and friends. We can’t wait to see the Pokémon you catch!

Pokémon GO is in the process of being updated to version 0.57.2 for Android and 1.27.2 for iOS devices. Below are some release notes and comments from our development team.
Over 80 additional Pokémon originally discovered in the Johto region can be caught.Gender-specific variations of select Pokémon can be caught.Added new encounter mechanics.Added Poké Ball and Berry selection carousels to the encounter screen.Added two new Berries.Added new avatar outfit and accessory options.Added new night-mode map and encounter music.Added bonus Candies for catching Evolved Pokémon.Implemented Apple Watch connection stability improvement.Various bug fixes.Minor text fixes."

- The Pokemon Go Team over at Niantic Labs

Thoughts:
I haven't touched Pokemon Go since they added the Pokemon Buddies. Is this worth opening the app again? Personally I don't really feel motivated to due so. Niantic is still neglecting their fans and they seem to be catering to iOS with the wearable app function only available for the Apple Watch. I don't have an issue with Apple but, I feel they should be catering to the masses.