Box Description:
Ignite the Revolution
"The American colonies, 1775. As a Native American assassin fights to protect his land and his people, he will ignite the flames of a young nation’s revolution." 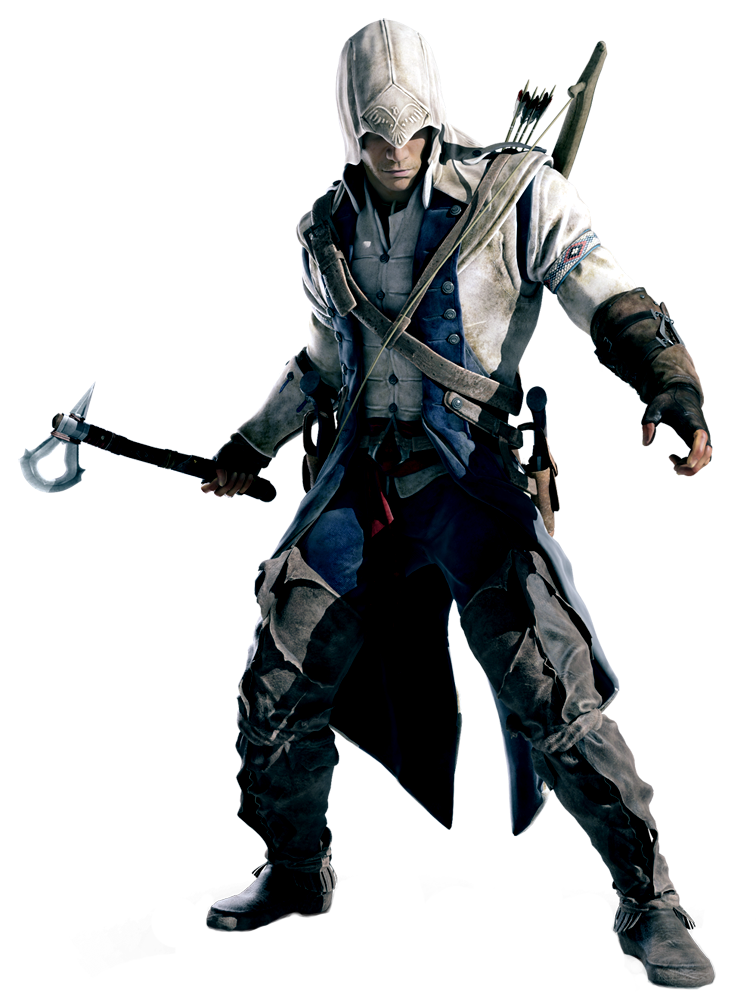 What is it?
Assassin Creed is the 3rd (well technically 5th) game in the Desmond saga (this is at least what I like to call it because I’m guessing that the game will branch off after the Desmond storyline is over).This game’s main protagonist is Ratonhnhaké (or Connor Kenway) who is half Native American half English who becomes an assassin to protect is land as well as his people. You will also be playing through an alternate story line as Desmond Miles who is continuing his story of escaping the Templars and saving the world.

Graphics:
Assassins Creed III is a sight to see. Everything from facial animations to the vast free roaming world of the frontier to the violent waves of the ocean is beautifully animated. For the most part everything runs smoothly. Every once in a while you get dropped frame rates or graphic hiccups. One thing that I noticed that kind of pisses me off is that you are attacked by a bear early in the game and if you manage to kill it you will use a hidden blade that technically you haven’t received yet… Also there is a scene where Connor zip-lines using his tomahawk but if you don’t have it equipped you will use whatever small weapon you have and to be honest it would be physically impossible to do that with a small knife.

Sound:
The game’s soundtrack is what you would expect from the Assassin’s Creed series, nothing really superb or even that memorable. Where the audio shines is in the voice acting and in the ambient noises.

Gameplay:
UbiSoft revamped the gameplay elements this time. They changed the battle system to a more counter orientated system. You can no longer just hold block to defend yourself from hoards of enemies you have to counter which makes things a bit more difficult but more satisfying. Free running was made easier in Assassin’s Creed III, now you don’t really even have to jump anymore you just hold the R(t) button and you will run scale buildings jump to only  safe areas, and climb trees like you are racing though jungle gym. They also added naval battles which are either a hit or a miss, I like it but I know people who find it repetitive. There is also a ton of mini games like checkers etc. that you can play as well.

Multiplayer:
I was hyped for multiplayer before I got the game. I was even more hyped when I got the game a realized that there is a whole separate disk for it (well at least on the Xbox360, not too sure about the Wii-U and the PS3). It turned out that I was a little underwhelmed after finally playing it for a few reasons.  I waited to the first disk before even putting the multiplayer disk in the system, which turned out to be a bad move because other players are on higher levels, which makes the game that much harder to succeed at. Wolf-Pack, the new game mode added is good but rather simple if you have a 4 other players playing with you.

My Thoughts:
Assassin’s Creed III is a great game. It wasn’t as epic that I hoped it would have been but to be completely honest my expectations were set really high to begin with. The game has its flaws but they are easily looked over because the game has so much to do that you will forget about them. I wish that the Multiplayer mode felt like a MMO or even if it felt a little more like Red Dead Redemption or like GTA IV I wound had been more satisfied with the experience.