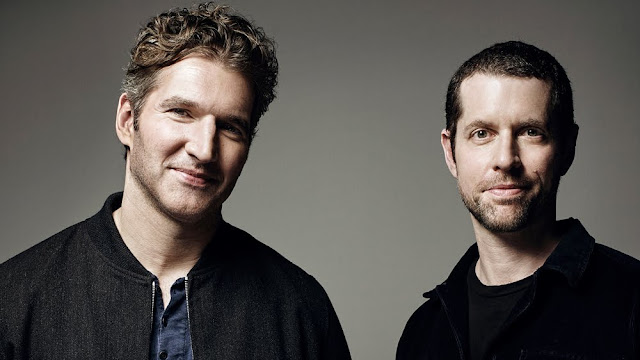 The masterminds behind the HBO hit series Game of Thrones will be writing and producing a new series of Star Wars films.
#GameOfThrones #Disney #StarWars #LucasFilms #News #Movies

" David Benioff and D.B. Weiss are going from Winterfell to a galaxy far, far away.

It was announced today that Benioff and Weiss, creators of the smash-hit, Emmy® Award-winning television series Game of Thrones, will write and produce a new series of Star Wars films.

These new films will be separate from both the episodic Skywalker saga and the recently announced trilogy being developed by Rian Johnson, writer-director of Star Wars: The Last Jedi.

“David and Dan are some of the best storytellers working today,” said Kathleen Kennedy, president of Lucasfilm. “Their command of complex characters, depth of story and richness of mythology will break new ground and boldly push Star Wars in ways I find incredibly exciting.”

“In the summer of 1977 we traveled to a galaxy far, far away, and we’ve been dreaming of it ever since,” Benioff and Weiss said in a joint statement. “We are honored by the opportunity, a little terrified by the responsibility, and so excited to get started as soon as the final season of Game of Thrones is complete.”

No release dates have been set for the new films, and there have (thankfully) been no sightings of White Walkers around Lucasfilm." - Disney

Thoughts
Holy crap... This is amazing news for Star Wars fans. David Benioff and D.B Weiss did amazing work on the Game of Thrones series, and now Disney has acquired their talents for the upcoming Star Wars series. This may be the kick that Lucas Films were missing to take the Star Wars films from good to great. On another note at what point does the conversation come up when a company begins to get too powerful...? Disney has been dominating the film industry for years now and they are eating up all of its competitors. There isn't may film giants left and they don't stand a chance against the IP that Disney possess... It will be interesting to see where they go from here.