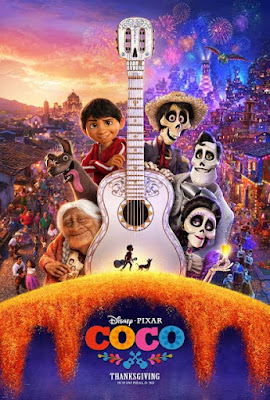 
" When aspiring musician Miguel (voice of Anthony Gonzalez) ends up in the Land of the Dead in Disney•Pixar’s Coco, his family takes him to the Department of Family Reunions, where a busy clerk (voice of Gabriel Iglesias) informs him that he’s cursed. To return to the Land of the Living, Miguel will need a magical marigold petal and the blessing of a family member—but, according to the clerk, the family member can include any condition she likes—even forbidding music forever." - Disney

Thoughts
I still feel like this film should come out on November 2nd, being that is the last day of "Dia de los muertos". Regardless this looks like it will be another classic by Disney and Pixars

:Look for COCO in theaters this Thanksgiving ...