Pokemon Scarlet | Violet Review - Its a bit late but was giving the game time to settle... 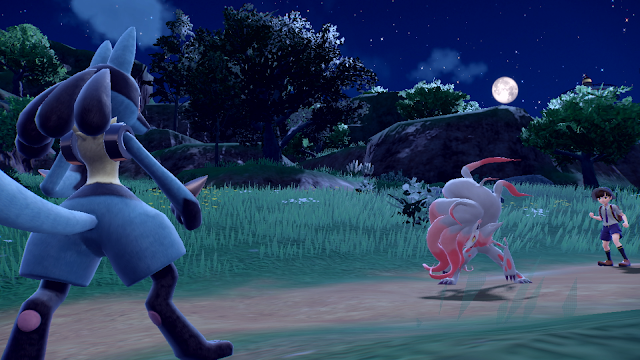 Following the success of the new 3D engine & open world of Pokemon Legend Arceus, GameFreak made the choice to make a more open, world traditional Pokemon game… Pokemon Scarlet and Violet will be the new baseline for Pokémon Games.

“The newest chapters in the Pokémon™ series, the Pokémon Scarlet and Pokémon Violet games, are coming to the Nintendo Switch™ system later this year. As the main character, you can explore the wide-open world of Pokémon Scarlet and Pokémon Violet at your own pace. In these games, you’ll be able to enjoy the iconic adventures of the Pokémon series, like battling against wild Pokémon and trying to catch them! Choose either Sprigatito, the Grass Cat Pokémon, Fuecoco, the Fire Croc Pokémon, or Quaxly, the Duckling Pokémon to be your first partner Pokémon before setting off on your journey through this new region.” ~ Nintendo

If you have played a traditional Pokémon game in the… well… ever, then you will understand what you have to do here. You will travel to 8 different gyms spread across the region and take on gym leaders and receive a badge for each one. When that is all said and done you will make your way to pokemon league where you will take on the elite four and the current champion.

In the Paldea region this is still the basic formula but will some additives. Along with your traditional “Victory Road” quest there are 2 other quests that make up the main story of the game. “Path of Legends” quest will have you hunting down gigantic pokemon to obtain ingredients to help your Legendary pokemon companion regain its lost abilities. The final quest is “Starfall Street” which will have you taking down Team Star who are a bunch of misfits from your academy.

Combining these 3 main quests will make up the main story of the game. I love the fact that you can tackle these in whichever order you please but, I will suggest doing it in a mixture of all 3 because the battles do not scale. I also wish i knew which abilities your legendary pokemon would obtain ahead of time because it would have made traversing the world of Paldea much easier. I suggest focusing on doing all of the Path of Legends whenever you feel stuck or can’t seem to reach a location on the map.

What sets Pokémon Scarlet | Violet apart from any previous pokemon games is that it is completely open world. It takes what Pokémon Legends Arceus did with open areas to the next level. There are some cons to this that became apparent while playing the game. Pokémon spawns are more of a randomized occurrence like the older games as opposed to pre-determined like in Legend Arceus. For example If i enter an area in Legends Arceus and there is a shiny Growlithe, I can save, and run away from it do something else then go back to it and, as long i don’t leave the open area it will still be there. In Pokémon S|V if the Pokemon de-spawns it is gone… Another downside appears to be the overall game performance.

Multiplayer in Pokémon S|V received a huge upgrade this time around. You are able to do pretty much anything you were able to do in previous games but now you can literally invite your friends (up to 4 I believe) to go adventuring together. That’s right, you can see and interact with your friends while playing the game. When linked up with people with the opposite versions of the game you will be able to catch version exclusive Pokémon, which is a huge win in my book. The inclusion of raid battles is also a nice touch.

Visually, Pokemon S|V is not really something to write home about. Yes these are some of the best pokemon models we have seen to date but the world in general leaves much to be desired. Landscapes over time gets repetive and, feel empty & underdeveloped. When things start to get interesting within the cities you will quickly realize interiors were a complete afterthought.

There are a ton of graphical glitches as well, mostly with characters & Pokémon clipping with the environment and other pokemon. The camera also was very wonky prior to the most recent update (Recently installed the 1.1.0 version and it has seemed to fix the main issues i’ve had with the camera).

If you have heard anything negative about Pokémon S|V then it probably pertains to the way the game performs on the aging Nintendo Switch hardware. Well right off the back i can say its not great but its not as bad as people make it sound. Don’t get me wrong the game does chug along and it has issues with frame-pacing. The game is supposed to target 30fps but you’ll spend most of the time at cinematic 24fps (and no this is nto a good thing). For some reason i feel like Pokémon Legends Arceus ran a lot better than S|V and it might actually be the case but, there is a clear reason for this. Pokémon S/V is a complete open world where technically Travel from one corner of the world to the other without a fade to black or loading screen (Yes there are some loading areas like when you go into buildings or trigger a cutscene, as well entering the city where the academy is or the Pokémon League). In Pokémon Legends Arceus, the world is separated into zones where there is a loading sequence.

In the sound department this is your typical Pokémon affair here. You have your normal repetitive overworld field theme that has variations depending on what you are doing. You have your game specific Pokémon Center Theme (it is always a slight variation of the original Pokémon Center theme from GEN1), and battle music. You also get you city / town themes which all are pretty good. A bonus is that the end credit theme is a song made by Ed Sheeran “Celestial” (haters gonna hate by i like it beside the fact that you will probably not be able to monetize your video if you all the the end credit theme to play).

Where Nintendo kinda missed the ball is adding in voice acting for the cutscenes. If they were able to do this in parts of The Legend of Zelda: Breath of the Wild they could have done that here.

Prior to purchasing Pokémon S|V I was a bit skeptical because I’ve been hearing all the bad performance reports coming in for multiple outlets who have received the game before release. I was guestamating that this would be fixed in the day one patch, but to my surprise it wasn’t. People who received the game on release were also mentioning unacceptable performance from a top tier Nintendo franchise. So I decided to wait a week and still no fix / update from Nintendo. I caved and purchased my copy of the game. In all honesty I’m glad I did because I wanted to experience it my self and see if it was as bad as they say. All in all it was a bit glitchy and slow at times but it still didn’t make the game unplayable to me. Once you are playing for a few hours you kinda of ignore the performance issues and try to enjoy the game.

Pokémon S|V feels like a case of 1 step forward and 2 steps back. The game manages to improve on storytelling and some gameplay elements but falls behind in game performance & in some game design. It previous iterations of pokemon games interiors and caves all played a decent role, but they decided to skip those mechanics this time, which is unfortunate.

All in all if you like the Pokémon franchise i do recommend picking this one up. I love that Nintendo chose to use Hispanic and Latin culture to base the game off of. It’s always nice to see various cultures appear in video games, especially ones where you don’t expect it. Nintendo did release an update for the game in December 2022 which took care of most of the camera clipping issues I have had. Load times do feel a bit snappier. This shows that Nintendo does care about community feedback. They may not fix every issue with the game but at least they are aware of the issues that the game has launched with and, are attempting to address them. During my play through I found myself forgetting about most of the issues that plague the game and just enjoying my open world 3D rendered Pokémon adventure that I have been waiting for since I first picked up the original RBY games on the gameboy.