Sonic The Hedgehog 2 HD Project (Fan Game) - Is it any good?

Sonic The Hedgehog 2 is a fan favorite when it come the Sonic The Hedgehog franchise, and its a bit of a shame that Sega hasn't graced us with a HD remake of the game. Thanks to a few very talented fans we can get a taste of what it may actually be like.

Sonic 2 HD is an unofficial overhaul of SEGA’s franchise classic for the modern world. It is made for fans, by fans, with no financial gain whatsoever.

From the very beginning of the project, Sonic 2 HD has focused on maintaining the feel that has made Sonic the Hedgehog 2 a classic while using new tools to reimagine the original as it could have been were it made today. The game’s art direction reflects this, but Sonic 2 HD has also given equal attention to unseen essential elements in the physics and audio. The result of this is an unprecedented re-interpretation in high definition graphics, music and gameplay of Sonic 2, which continues to set quality standards to this day.

We firmly believe 2D artwork is the foundation of Sonic’s retro roots. With this in mind, our goal was to produce a similar shading style to the Japanese original concept artwork and set it in motion with hand-drawn animations. Now, 25 years after Sonic 2’s release, Sonic 2 HD can faithfully represent the original’s cast of characters and environments in a world where technology no longer imposes artistic limitations.

Is it any good?

In a short answer; Yes, its really good. The game reminds me of what CAPCOM did with the Street Fighter II HD. The game is completely re-worked. The colors pop and the character sprites & animations are top notch. It is hard to believe that this is a fan made game.

What are the downfalls?

Off the top of my head I would have to say, the game plays a bit different than the original. The mechanics are mostly all there but if you played Sonic The Hedgehog 2 as much as I have, you notice a few things. All in all I am beyond impressed with how it plays. Another thing to keep in mind is that this is a demo, and you will only get to experience 3 levels (Emerald Hills, Chemical Plant, and the Hill Top Zone). Lastly from what I heard the game is a bit demanding to run on hardware without a dedicated GPU. I haven't tested this myself yet but ill update my findings. 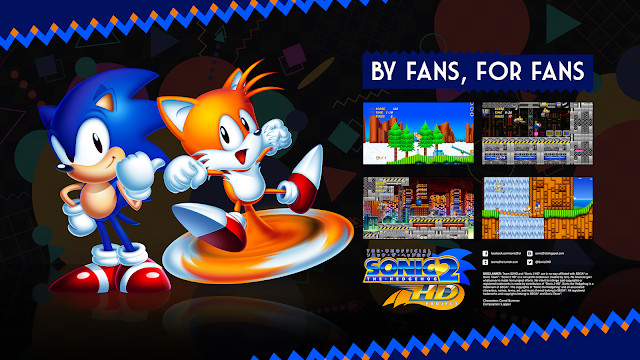 I am stoked to see what the devs do with the rest of this game. Hopefully Sega or Sonic Team picks them up to make this an official project to be ported to the major consoles as well as PC (Similar to what they did will Sonic Mania).