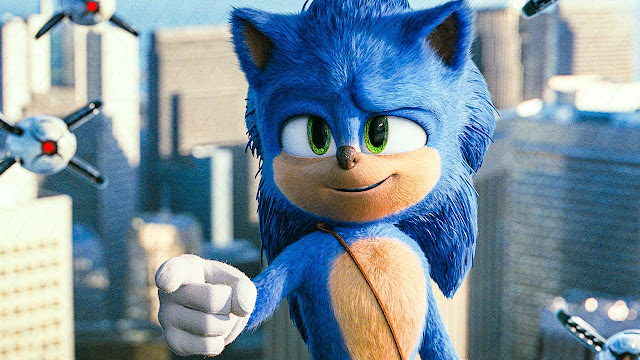 Sonic The Hedgehog is nearly 30 years old and only now making his premiere on the big screen in new movie by Sega and Paramount.
#SonicTheHedgehog #Sonic #SonicMovie

The blue blur is back but this time he isn’t staring in a mediocre gaming adventure or even in a cartoon T.V series. He is starting in a new big screen film along side Jim Carrey.

The movie opens up with Sonic at a very young age in Green Hill Zone. He is racing through the level like you would while playing the original Sonic The Hedgehog game. He eventually makes it back to his home when he meets up with Long Claw (A Owl who is acting as a maternal figure to him). Soon after the are attacked by what appears to be the echidna clan. They basically Bambi Sonic before he escapes to Green Hill Montana were the majority of the movie takes place. Sonic spends years here unseen by most humans but eventually starts feeling lonely which leads to the events that sets the movie's plot into motion.

I have to hand it to Paramount, they definitely saved face here. The original Sonic CGI model they came up with was horrifying and should have never left the drawing boards. The new CGI model is almost perfect. The one slight flaw is that Sonic’s arms are blue. If you look at all other media of Sonic besides Sonic Boom, Sonic arms match the color of his stomach and mask (maybe there is a reason why they chose this version of sonic to go with...?). Beyond the Sonic The Hedgehog model everything just looks great.

Ben Schwartz did a awesome job as the voice of Sonic. Originally, I was hoping that they just casted Roger Craig Smith (being that he has been the Voice of Sonic for a while now) but Ben did a great job. Jim Carrey is Dr. Robotnick, and i cant imagine any other actor portraying him now. (Live action wise). He even sounds like him in the final scenes of the film.

Besides some nostalgic musical cues here and there the music wasn’t that memorable throughout the movie which kinda sucks, being that Sonic games are know for the tunes that you can get out of your head.

This is the type of movie that you want to see more than once, especially if you are a long time Sonic The Hedgehog fan. It is really hard to catch all of the Easter Eggs that they thrown in there for long time fans after a single watch.

Being a long time fan of Sonic The Hedgehog (heck I played all the games or the Genesis on up) I knew I was going to see the movie no matter how bad it is. In the end I was pleased that it wasn’t a train wreck. Was the movie spectacular? No, but i had low expectation from the get go. Sonic The Hedgehog is currently my favorite Video Game Movie to date (Wreck-It Ralph doesn’t count). The only movie i can really compare it to would be Detective Pikachu, and I would give the edge to Sonic The Hedgehog.